Home » Looking for oneself
Previous Next

Angelo Cannata2022-02-25T15:06:51+00:00Course of Spirituality - Level 2|
In admiring
that infinite part of the universe
that opens up to my mediocre eye,
I stretch my hand
to confetti of light,
frescoed on a plaster of darkness
in the wall of the immense.Perceiving in hands
its constant pulse
is comfort
to my immature sense,
removed, at random,
from the sack of consciousness.I feel hungry
for the fire
that gives birth to the Star my friend.I approach, wistful, a man of my crowd,
participating to the unique game,
that I still feel, but deprived of flame.

Anassimandro, a 6th century BC philosopher, believed that fixed stars were nothing more than holes, that the light of the fire, located behind the sky, passed through. The poet Di Martino reminds us that every conception of the world, every idea, arouses, in our intimate, emotions that influence the meanings we identify in our existence.

The magnificence of the universe leads him to consider his own eye as a mediocre eye. We might perceive, in this feeling small, Psalm 8: “When I consider your heavens, the work of your fingers, the moon and the stars, which you have set in place, what is mankind that you are mindful of them, human beings that you care for them?“.

The outstretched hand can be understood after reading the continuation of the poem, in which he considers the pulse of infinity like an affectionate nanny. This latter word lends itself to a double meaning. If we mean “to have as a nanny”, we have the concept of a universe that acts as a nanny to the poet. This allows us to understand the outstretched hand like the hand of a child, raised in an attempt to touch the stars. If, on the other hand, we intend to have “at the mercy”, we find the concept of a human being who acts as a star and then the outstretched hand is a hand that wants to caress the star, cradle it, and feels its pulse as if the star were a child of which, in cradling it, we perceive the throbbing of breath and heart.

The exact term used by the poet is not pulsation, but compulsion, which means push, impulse: the poet feels that the Star has within itself a push towards him: it’s a perception similar to that expressed in the poem on the Moon, by which he felt looked at.

The term “confetti” recalls the effect of an intermittent glint, a pulsing that makes us attribute the stars a vitality which is like a smile turned towards us.

Just as the moon was “painted in the dark“, the stars are confetti “frescoed on a plaster of darkness“. This background of darkness looks like a note of distant and hidden fear, it is the presence of death, which acts as a background at any moment of our life, even the most beautiful one. The poet does not hide this note which pollutes every human smile, but this, for him, doesn’t turn life to sadness.

In his relationship with the stars, the poet feels that a process of maturation, of growth, is taking place: this is the idea aroused by feeling immature; however, this growth is not only a necessary step forward: it is also the comfort of staying, stopping; in this sense the word “removed” can be applied to the comfort, rather than to “my immature sense”: it is the sense of deep comfort that is unfortunately often forgotten, due to the distractions of the crowd, to which the poet refers later.

This whole sentence contains two freudian terms, compulsion and repressed, as if to say that the contact with the stars recovers the poet’s contact with the depth of himself and of humanity in general, an intimate, hidden universe which is worth rediscovering and exploring, albeit with the necessary delicacy, prudence, respect, because it proves to be the source of intimate, sweet, profound experience of our human being and of the historical human community we are part of.

Removed can also refer to my immature sense and then immature does not mean non-mature, but primitive, primordial: daily worries lead us to remove from our consciousness certain primordial sensibilities, which wander, deep in our selves, until the contemplation of the stars recovers their right of citizenship and finally makes them feel comforted after the trauma of repression. In this sense “at random“, to which the poet makes reference, is the violence of this world, which, like a bulldozer, does not distinguish between beautiful and bad things, but it blindly removes all that is felt as an obstacle to the urgent needs of superficial daily living.

Consciousness is defined as a sac, which makes us think of an amniotic sac, a container in which our identity it is formed and develops. Then we can refer this sack to the collective consciousness, the others, who, with their being, help to define our identity, but also to hide what is considered an obstacle to banal social life. In this case the bulldozer is precisely the sack, the social sack, the sack of the banal social consciousness which each of us is immersed in.

Similarly to the previous poem on the Moon, in which the poet was always looking for scraps and on stealing, here he is hungry for the fire, a hunger aroused by the foretaste of the stellar beauty, but a healthy hunger than anyone should rediscover in himself.

In the last part we find what was a meaning of the sack of consciousness, that is, the sack of the only social game, here now called “crowd“. The man approached by the poet is the maximum anonymity, the mass man, a wheel of the game of gears that form the bulldozer that blindly invests and removes primordial sensibilities. Such a man makes him feel the pleasure of social play, but it is an empty game, deprived of the immeasurably deep and sweet pleasure that the poet’s soul had been able to enjoy while cradling the star and letting himself be cradled by it.

In these last verses there is a repetition of assonances between man, game (specially written in this more archaic form) and flame: the poet is hungry for fire and thinks he finds this fire in man, since it has a similar sound and even more similar is found in the game created by man; but it is a deception, in the end he must conclude that it is not so: flame, despite the similarity of the sound, is unfortunately not found in man, nor in game, but it is a completely different thing, which he unfortunately could only find by looking at the Star. 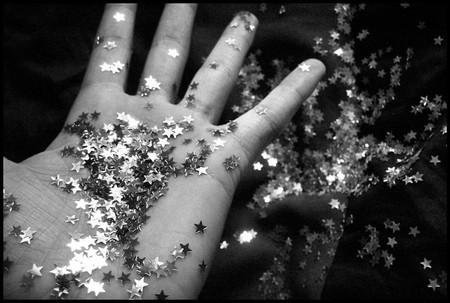