Home » A sea
Previous Next

Angelo Cannata2022-09-16T18:05:42+01:00Course of Spirituality - Level 2|
Show list of the lessons
Between a Sun and a Moon,
it is an art thinking about
how vicious it is
that ambiguity between me and I,
harbored in the surreal
deception of an existence
consumed in estimating
pompous cannibals of other people’s lives.Between a thousand Suns and a thousand Moons,
it is an art thinking
that free
the soul will be
from any vice,
deception or ambiguity,
when it’ll have lost the panache
for the dark boastiness.What an anguish this art is,
if thoughts and card castles
shape a sea
where those who think can drown.

between me and I

the second one by

cannibals of other people’s lives

which also bridges the multiplicity of the next verse

In this sense we can infer that the sun and the moon symbolize the ego and the me: the me is the ego made object, object of reflection, just as the moon reflects, it is object of reflection of the light coming from the sun. Consequently, the thousand suns and the thousand moons symbolize the multiplicity of the Is (here meant as a plural of I) and selves of human society all over the planet.

So in its debut

Between a Sun and a Moon

the author shows himself in reflection about himself:

Between a Sun and a Moon

is in this poem the exact equivalent, in inverted order, of what is said three lines later with the words

between me and I.

All three stanzas are characterized by the reference to thinking as an art. This duality must be considered with vigilance: there is a lot of difference between privileging the semantics of thinking and privileging that of art: in the first case we project ourselves into the world of mentality, cerebrality, while in the second we are oriented towards practice, lived experience. So what does the poet mean when he says that thinking is an art? Does he want to exalt the greatness of the human mind, or does he want to warn us against the risk of carrying out thinking without making it be an art, therefore making it remain in the random, in the smoky? In this suspicion lies the central meaning of poetry, which we will find more fully defined in the last verse.

What is the implementation of thinking as an art, therefore as life, as concreteness, rather than as smoke? It consists of a critical action: it consists in becoming aware of a vice:

how vicious it is

What is this vice? It is the bad ambiguity, hidden behind reflecting on the nature of the ego, objectified when we call it “me”. But what can be bad, ambiguous, in simply considering our being I? There is a falsehood, a deception, a lack of adherence to reality, and, even more, a claim to place ourselves above reality: in the particular context of this poem, surreal means “above the real”, ” in a position of domination over reality “. This is what the me is: the claim to dominate the being of the ego, through the concepts that we build on it. This placing our ego in front of our eyes, by calling it “me”, is an arbitrary split. In short, when we look in the mirror and say “That’s me”, we are committing an act of malice, of pride, because we are deluding ourselves that we understand what our I is, we are proud to have understood that that is the image of ourselves, forgetting that at that moment it is the ego that is the mirror of the mirror, that is, we are the ones who ultimately choose what sense to give to the image that the mirror is giving us back and therefore it is ultimately a relative, subjective, limited sense deformed by our mentality.
The doubling of the ego, which occurs when we think of putting it in front of us and making it an object of reflection, calling it “me”, is lysis, splitting, breaking of existence, pollution of its unity, therefore deception ready to become pride, arrogance .
In our reflection in front of the mirror we think we can recognize the arrogance of cannibals, who are always the others and never ourselves, and we forget that each of us is arrogant, superb, cannibal, when he says in front of the mirror “That is me “, because we forget that “who I am “must not be told us by the mirror, the others must tell us. Making the mirror speak means deceiving and deceiving ourselves because it makes us forget that when the mirror speaks we are actually always the ones talking, lately we are the ones who establish the meaning of what the mirror is saying.

In all of this, then, we try to take a step forward, try to make others say who we are and so we are in the second verse. The relationship with others opens our eyes to the deception we have said above, unmasks our arrogance, compared to the previous moment, when we thought that only others were arrogant. It makes us aware of the unconsciousness in which we were, a so deviant unconsciousness as to make us exchange the arrogance for panache, in short, being cannibals is presented, incredibly, brazenly, as a demonstration of our having a good taste: if I kill it is because I am good, if you kill it is because you are bad.
If in the first verse the art consisted of making oneself aware of the ambiguity of the ego who watches himself, takes a selfie, thinking he has identified a “me”, in this second verse the art consists in a hope

that free
the soul will be

When will this hope come true? Everyone imagines it in its own way, what matters is that it is an art, which includes in itself the search for morality, the effort to be aware of our being pompous cannibals.

And here we are at the last verse,

What an anguish this art

which seems to be a manifestation of melancholy, sadness, pessimism, but it let’s us think that instead it is a warning: this art is anguish if …, suggesting that if it is not practiced in this way, it will not be anguish. This art is anguish if thoughts become castles and pretend to be form. This was Aristotle’s claim, claim to have identified in the form the being of everything, the essence, the substance, a claim that still imprisons all Western thought in metaphysics, in realism. Castles, form in this last verse are terms that indicate order, schematism, framework, dogmas, pre-established truths: this is how it is, how is has always been, this is how it must be, always, forever. This makes art anguish, transforms it into a sea in which those who think drown without realizing the sea in which they are drowning, because they are inside it up to their necks and beyond their necks. Then the positive proposal implicitly appears here: thinking can be an art, as long as it does not rely on the mirror, because the mirror is still us who look at it and interpret it; it is an art as long as we cultivate hope in future freedom, as long as this hope does not become a castle, because all the castles are made of paper and when they collapse they are like a sea that envelops us and makes us drown.
This last thought cannot but to make us think of another drowning in another sea, a drowning that is instead humble, which actually is a container and source of deep vitality, as Leopardi admirably expressed in the poem The Infinite:

in this
immensity drowns my thought:
and shipwreck is sweet to me in this sea.

Finally, it is worth highlighting some assonances and alliterations that embellish the already compelling contents of this poem: some verses seem to have a hint of rhyme, which stands as modern elegance, halfway between a traditional poem with perfect rhymes and a futuristic and experimental poem. Thus we have the repetition of the diphthong towards the end

… vicious it is
… between me and I

“Dark”,”Atra” in Italian, referred to the arrogance, is presented as the dark side of “art”, “panache” as the false and hypocritical side of “arrogance”. 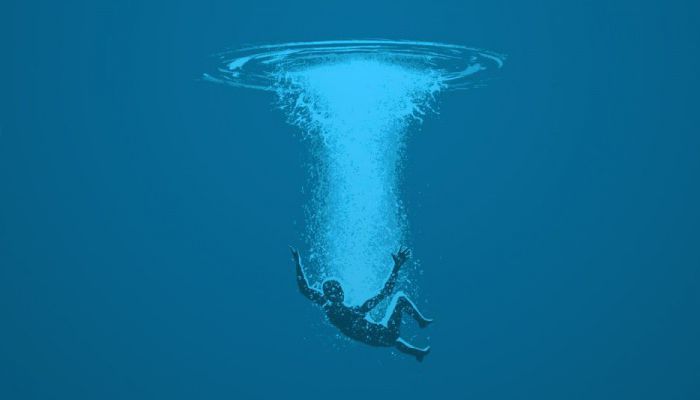