Home » Spirituality as a microuniverse

“The guitar is like an orchestra to which we could look with the reverse side of binoculars”: these Andrés Segovia’s words offer a mental category very useful to the experience of spirituality. Human spirituality, good, experienced primarily in silence, in relation to universal spirituality, evil, can be considered a microuniverse where we have the opportunity to walk and live an existence. As micro-, it will be perceived as something limited, small, insufficient, weak; in some ways we can only say that we have nothing else available and therefore we have to be content. On the other hand, as it is actually a -universe, with a little patience we can appreciate and enjoy all its extension, its micro-immensity. Though it is micro, it’s still an environment where we can be lost and swim without knowing how far its borders are.

Returning to the comparison with the guitar, it is not difficult to experience that a classical guitar, with its faint, microscopic sound, can communicate infinitely more power than an electric guitar supported by speakers that can bring down a building. This tells us that the difference between micro and macro universes is a question not of exterior dimensions, but of cultivation of human sensitivity. This is not to fall into the easy temptation to consider death, evil, defeated, by simply cultivating experiences of micro-universes. Physic macrouniverses, universal spirituality, retain all their capacity to impose themselves on our experience and to kill us; our response of dedication to micro-universes poses itself with humility, modesty, weakness; but weakness does not mean non-existence; it is cultivation, a term that in itself expresses the idea of being an attempt, not a success in strength.

Any art can be evaluated by this category of microuniverse. Even in painting, for example, a canvas is a very small world in which to move, and yet through it we can explore worlds of which we still totally ignore the boundaries, the expressive potentials.

These micro-universes are becoming, are alive, they live within us and allow us to live. Each of ourselves is a microuniverse, who has the possibility, among other things, to cultivate the microuniverse of human spirituality, just in the most abstract sense, that is also free from particular sources, and especially the spirituality of walking of silence.

In this way of experiencing silence we can be tempted by emphases on the perception of evil or on that of good; from this point of view we can imagine each of us as a wanderer, who carries within him his treasure of living microuniverse, a traveler who, through his way, looks around and sees both good and evil, the way behind, the way coming in front and the landscape on his sides, with others who also walk through their paths. 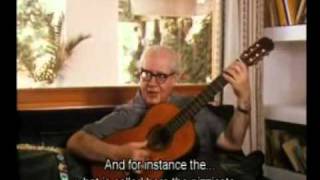 Click on the picture to watch the video
Page load link