The whole and its parts in the structures of spirituality

I will complete this analysis of spirituality structures by considering this tiny word search:
B U T T E R F L Y

Inside we can find two words: BUTTER and FLY, while there is a third one which constitutes the entire word search: BUTTERFLY. I want to emphasize that there is no difference between the entire word search and the words contained in it: the word search is nothing more than a long word, possibly with the letters arranged in a square shape, inside which it is possible to identify other ones. If we transfer this concept to the fact that our brain can be considered a word search, it means that there is no difference between our brains and the ideas contained inside them: the brain is nothing but an idea, a bigger structure, inside of which it is possible to identify smaller ideas. It is a set of neurons, in a large structure, inside which it is possible to identify smaller sets of neurons and smaller structures; what changes is only size and complexity. We could even say that the brain is made up of many small brains inside.

We had said that the whole universe can be regarded as a big word search, like a big brain; it follows that every object in the universe is considerable in turn as a small word search or a small idea inside. At this point we can say that there is no difference between ideas and objects, since either ideas and objects are nothing but structures that we think we can find. A stone can be considered a structure and on its surface it may be possible to identify shapes, as we do sometimes with the clouds; in this case the stone is like a brain in which we see with the naked eye the casual presence of an idea.

After what we have said, it is not difficult to admit that not only the brain thinks, but the ideas think as well. So, not only I think the ideas, but it also happens that they think me. Of course they do it in their own way, but the only difference between my thinking about the idea and being thought by it is only in the degree of complexity and the type of structures, such as the difference between the word search and the words that are inside it. It is not so difficult to consider that anything can be considered an idea, since everything is made of structures and any structure can be considered an idea. 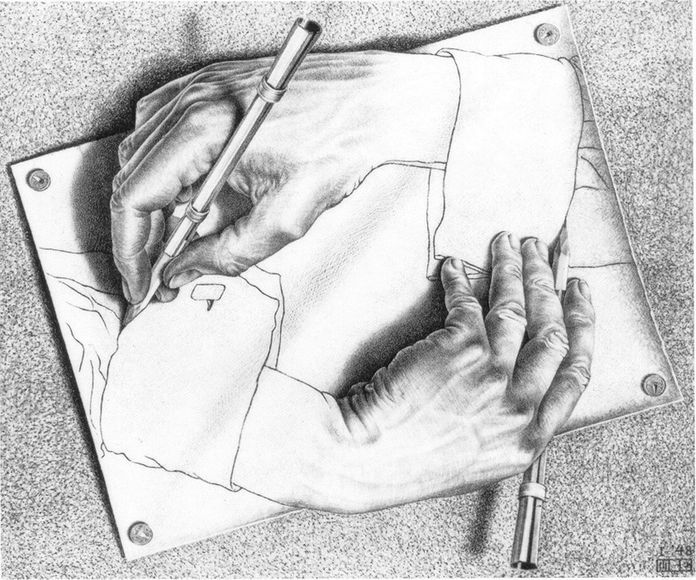