Home » Structures of spirituality – I – Word search
Previous Next

Structures of spirituality – I – Word search

Let’s make a brief introduction before we get into the discussion of the word search model. In the absence of definition criteria regarding the structures of spirituality, those who summon good will to deepen its study find themselves in a savage conquest land, where many seek to assert their position, taking advantage of the turbid for fishing, of the widespread ignorance to play as masters. One reason for this turbid on structures is that, simply, things happened this way, that is, philosophy and religion have had both their disadvantages regarding the possibility of making to this research a positive service. On this you can also see the article Why be interested on spirituality today.

Let’s be aware of the causes of this fishy, from aviewpoint of research for real structures of spirituality, trying to figure out how do we believe that in our brains a spiritual experience happens. To this end, I find it very useful to take as a reference the game “word search” which can be found in various newspapers, especially puzzles. It is a square, entirely filled with letters of the alphabet, in which we must find the words, which may be horizontal, vertical, diagonal or even backwards, in short, in all directions.

Here’s an example of word search: 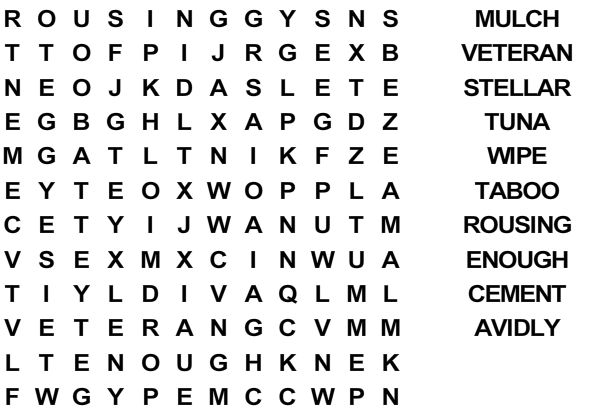 When we find in the square one of the words listed on the right, we mark it with a pencil, either in the square and in the list. The game consists in finding all the words and then reading the remaining letters, which will form a new word or phrase, for example a proverb. For example, it may be noted that in the forth from last row, reading backward, there is the word “avidly”.

At this point we can imagine to create a word search without choosing the words, that is simply filling the square with random letters. Then, looking at the square, it could happen to identify words that involuntarily come out. At that point one may wonder: those words are really in the word search, or is it just because our mind decides to see them there? It is obvious that, as a combination of letters, they are physically there, but it’s our mind that decides whether or not to see those words. For example, the word ACIDOM could be accidentally formed, which read backwards is Modica; one could say: “There is the word Modica”; another might respond: “No, there is only one sequence of letters, but it is not accurate to say that there is the word Modica; it is you that in that sequence choose to see the word Modica”. In short, it a situation comes out, with a mixture of objective fact (that is, those letters actually form the word “Modica”, when read backwards) and subjective fact (the letters form the word Modica just because the reader knows that word and therefore he finds natural to see it; those letters could suggest nothing to another person). This consideration may also be a mixture of a material fact and spiritual fact: those letters in that direction are a material fact; but the word “Modica”, that is there, is a fact or spiritual material, since only a few are able to see it? Here any answer can be the right one, either a response from atheists or a response from believers, who decide to think that there, in spirit, for those who agree to see it, there is the word “Modica”. Another person could argue that it is not a subjective phenomenon, because the word “Modica” is physically there; if it was not materially there, we would not be able to see it. Another might claim that it is subjective, the word is not physically there, but the reader sees it, so much so that he needs to follow the letters in reverse to be able to read it. This is the endless debate between metaphysical and antimetaphysicals, it can be extended as we want, and so today happens between philosophers and not philosophers, because it is not difficult to answer any statement with an opposite objection, without being possible to determine who is right. The spirituality structures we are trying to understand are affected by these issues.