Home » Self-portrait at 25
Previous Next 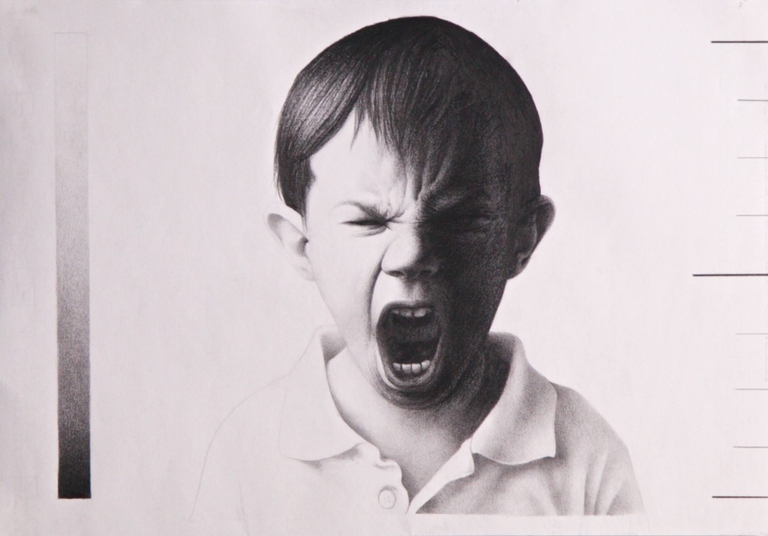 In some works by Giuseppe Alletto the eyes are hidden, dark, sometimes just like a cave that inspires fear to enter it. It may be thought that this is the cave of our unconscious, our intimate, where actually our most authentic self resides. This choice can be interpreted as an invitation to move with the mind beyond the exteriority of the represented face, in short, as if the portrait said “Look inside me, this face of mine is for this purpose only”. I think this is also the case with this boy, whose eyes are closed not by the mere chance of being in the tension of the cry, but as a reminder to go into his spirit, of which what is visible in the painting is only like an index finger pointed towards the interior.

The picture is included among the typical coordinates of the photos of a police archive or we can also think of a mental hospital. In this sense, the very strong tension between the squared lines, which try to cage the objective data, and the furious cry that does everything to pierce this cage, pierce the picture, as if the picture itself was a prison, is clear. In this sense we can also think of the idea expressed by Michelangelo, “Each block of stone has a statue inside it and it is the sculptor’s job to discover it“. In Alletto’s paintings it is possible to perceive this attempt to pierce the painting itself; an attempt that Fontana showed in the most plastic way, materially cutting his canvases, while in Alletto it emerges in a double direction: there is the image that tries to get out of the picture, therefore to pierce the picture by going towards the viewer, but there is also the call for the viewer to pierce the picture and enter it: this is what I said about closed eyes as an invitation to go inside. We could object to the artist that he himself is guilty of “framing” the subject when he makes it a “picture”, but the cage in which Alletto represents his subjects is not actually the picture that was drawn; it is life, it is the ego itself, but in this sense it is about the ego as a peel, as a super-ego, that society has made us build around our intimate self, the most authentic one, which remains imprisoned there as a worm in its cocoon. In this sense, compared to Fontana’s aesthetic gesture, Alletto’s one appears closer to life, to the human condition: we don’t have an abstract painting in front of us, but the portrait of a person.

Speaking of this boy’s scream, of cry, how can we not think of Munch’s scream, whose lines are instead phlegmatic, make us think of a zombie; in fact even Alletto’s boy can be interpreted as dead, killed, overwhelmed, and therefore caught, as from an instant photo, in the moment in which he brought out his last effort to oppose his energy to the world. But even when he was thought of as dead, this boy would keep intact all the strength of a protest that wants to be present today, as if to tell the spectator: be careful, because this boy who shouts is you, lives in you, is the your self waiting to be freed. In this sense, on the contrary, the eyes of Munch’s cry are wide open, they do not refer to the interior as it appears instead in Alletto, although the convolutions of the Munch trait still recall a world of dream, or rather, of nightmare.

Continuing the observation, in this boy we notice another contrast, between the typical sweetness of the infantile physiognomy and the sharpness of that hair on the forehead, the darkness of the general black and white and of the half of the face immersed in the dark, the tension of the lips, especially the lower one stretched down to highlight gums, teeth that express an incurable drama. The small central tip of the upper lip balances this aspect, communicating a different, albeit limited, area, a small oasis, from which attention, reflection and meditation emanate. It is the same slightly pronounced central point that can also be seen in the portrait of William Butler Yeats and in that of Giorgio De Chirico, also by Alletto.

It is clear, therefore, in conclusion, that this work by Alletto sounds like a warning, an alarm, an attempt to give voice to the ego that today is locked up, silenced, ultimately made to suffer, but the mass doesn’t even notice this suffering, this intimate shouting that is in each of us. We are therefore faced with an urgency, an emergency: it is not here a question about discovering and enjoying the beauties, the pleasure of the universe of our interiority: this interiority, which originally was able to arouse the pleasure of contemplation, has been devastated, trampled, raped, and, if we want to explore it, owe no longer encounter beauties to admire, but entire peoples, a whole universe that cries out its oppression. It is the same feeling I had years ago during a walk in a beautiful countryside, with beautiful trees, and there was also a beautiful stream, all very poetic, wrapped in the silence of the breeze; but when I reached the stream I saw that it was overflowing with a foam of unknown polluting products; it meant that nature only apparently, only as a distant memory made me touch its beauty immersed in silence; actually it cried, screamed its suffering asking me for help.